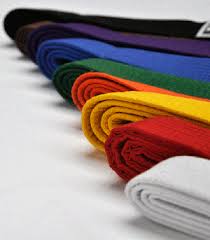 This section is for Roodekrans Krav Maga students only. Colored belts represent levels of progress for students of Krav Maga.

Krav Maga belts structure reflect a student’s  level of competence. Each belt achieved is truly an accomplishment worthy of respect.

It is also worth noting that achieving a belt isn’t just a matter of “spending enough time” in a previous belt. In order to achieve their next rank, a student must demonstrate their proficiency in their current belt’s techniques, to include Krav Maga Basic Moves and smooth execution of techniques.

Black Belt – One common “legend” concerning the tradition of belts claims that early martial artists began their training with a white belt, which eventually became stained black from years of sweat, dirt, and blood.

Achieving a Black Belt means “You have persevered and conquered great personal challenges, you have spend the time on the floor, you have mastered the basics of Krav Maga, and under pressure you have demonstrated the smooth execution of armed and unarmed Krav Maga Combat Techniques, you have passed the test for this coveted Krav Maga Black Belt.